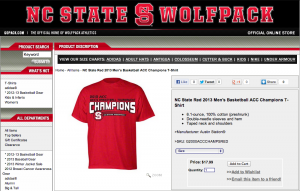 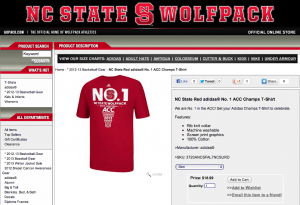 “N.C. State, the preseason pick to win the ACC, finished 11-7 in the league and enters this week’s conference tournament as the No. 5 seed.

Yet the Raleigh school’s confidence is clearly still high. 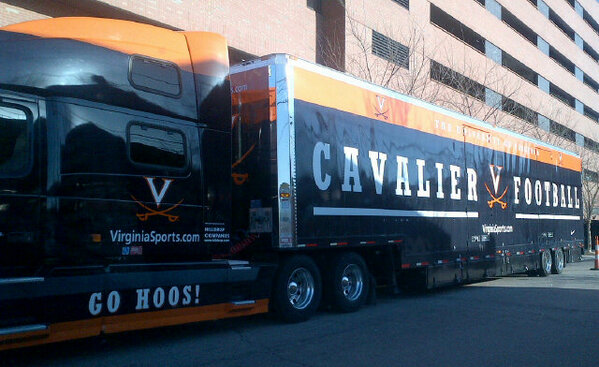 Moving trucks from his new employer arrived in Downton Raleigh today, as Tom O’Brien packs up for a new home. O’Brien’s exit from Raleigh has been merely a protracted formality ever since his October 27th defeat in Chapel Hill.

What’s the point of the event? Says Lauryn Collier, president of the college’s UAB, “The certified educators plan to use some of the items (those that are appropriate) to demonstrate healthy sex practices.” Which ones are appropriate? No answer from Collier. The university refused to tell Campus Reform whether there would be age restrictions for the event.”

Excitement ran wild in Raleigh this weekend as ESPN’s College Gameday was in town to witness NC State hosting UNC.  One State fan was so excited he decided to make a video of College Gameday at PNC Arena in order to hype up the fans.  And nothing hypes up state fans like… awkward footage of guys pissing in the arena bathrooms? 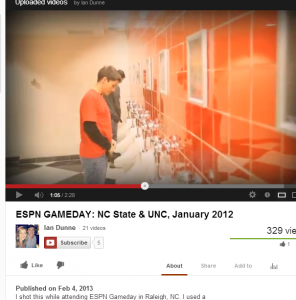 He has since removed the video, but thanks to this screengrab his inexplicable decision to record/edit/upload that content in the first place will live on forever.

On the bright side, state fans now seem to be doing their peeing in the bathrooms, and not in the stands.

In what is becoming a trademark move of Debbie Yow’s style of directing the athletic department, she sent out yet another email to some of the more dedicated Wolfpackers who had sent her messages about Tom O’Brien’s decision to punt the ball to Gio Bernard at the end of the UNC game on Saturday.

I am writing a group email this morning to those who have expressed their concerns about the loss to UNC-CH. There were a couple of issues expressed by several of you that I will respond to as best I can below:

(1.) IN GAME DECISIONS: ADs do express opinions and ask questions in private to their Head Coach about game decisions/strategies that do not work well, but it would be highly unusual for an AD to publicly criticize any strategy employed during a game. I agree with that philosophy of communication…no matter which sport it might be.

(2.) SPECIAL YEAR: I am aware that this was anticipated to be a special year for us, with the possibility of playing in Charlotte the first weekend in December for the ACC Championship. That appears to be out of reach now with the loss to UNC-CH. As unsatisfactory as it might seem to you today, the only comment I have at this time is that I continue to remain focused on doing whatever I can to support the efforts of this team and staff. Our young men played a gritty and determined game against UNC-CH in an extremely hostile environment and I want them to know that their fighting spirit as our student athletes is truly appreciated.

I acknowlege and regret the considerable disappointment you feel. The majority of you communicate your issues with respect and class. Thank you for that, as well. I hope to see you in Carter Finley for our Homecoming game against Virginia.

In the spirit of the Pack, 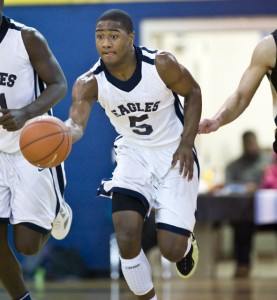 5-star basketball recruit Rodney Purvis was cleared by the NCAA to play for state this year.  Questions about Purvis’ eligibility arose in regards to his high school: Upper Room Christian Academy.  Purvis’ graduating class of 4 students was the first class to attend the recently created high school.  Prior to high school, Purvis had reclassified into the 2013 class, but after his freshman year he reclassified again back into the 2012 class allowing him to finish high school in only three years.

The NCAA requires incoming student athletes to complete 16 core courses.  Purvis was credited with completing….  8 …. one of which was an online course.

Luckily for Purvis (and nc state), the NCAA approved a waiver to the 16 course minimum legislation due to “unique circumstances”.

Update: Rodney Purvis’ graduating class at Upper Room Christian Academy, the first class to graduate from the high school, will also be the last.  The high school has closed down reportedly due to a “lack of funding”.